Bad Day L.A. really is a good way to ruin your day – Destructoid

I was happier not knowing the term “taco bender”

Yeah, I dodged a bullet back in 2006. I had followed previews for Bad Day L.A. and happened to be in a games store around the day it launched. It was budget-priced. Within impulse buy range. I don’t remember why I didn’t take it with me that day, but I left unscathed. Days later, reviews would tear strips off of it, and I’d just kind of watch the fallout.

I also don’t remember what has led me back to it, but it was sort of a case of installing it with the thought, “I hope this doesn’t run on Windows 10.” It does. Just fine. Except that it only runs in 1024×768 resolution, but it runs all the same, and therefore, I must play it. 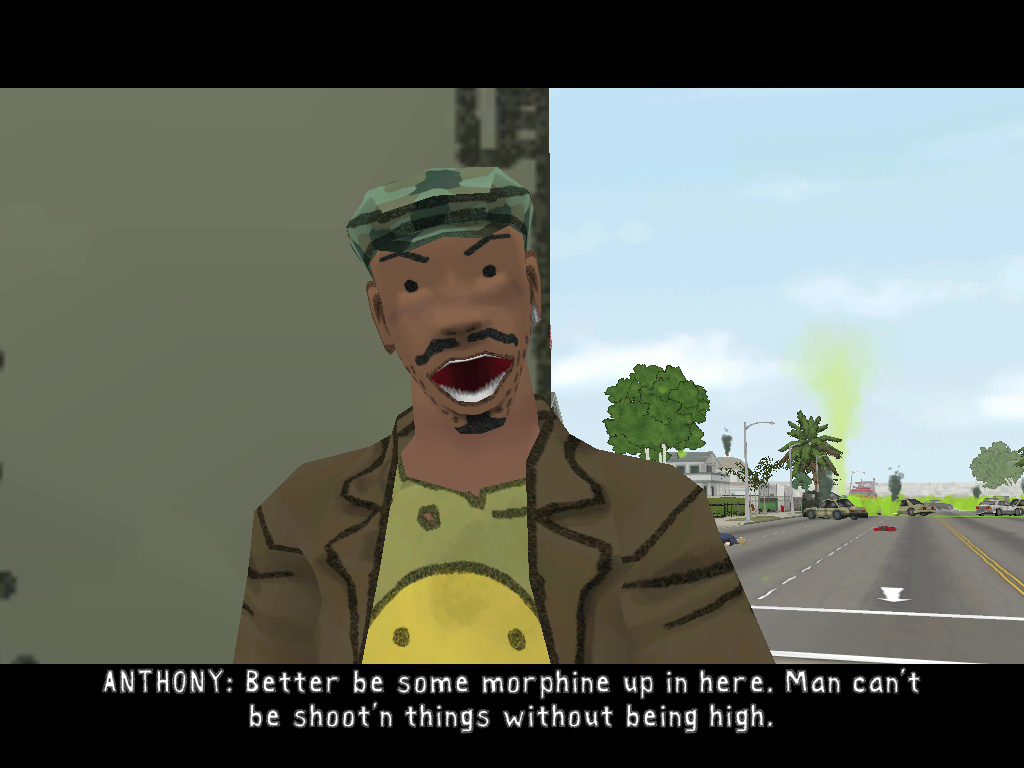 I don’t know what to say about American McGee. He’s a developer. He worked at id Software in the ‘90s and helped with games like Doom II, and Quake, and then he was fired in 1998 because id was “not seeing what [they] wanted.” He did American McGee’s Alice which some people liked and other people didn’t, then a bunch of games that didn’t go over so well. I’m not sure why his name was used as a marketing tool, but from the sounds of things, he’s not really sure either.

I don’t know, bad games happen. Here’s one of them with his name on it.

According to him, a Chinese developer approached him to make a game. He pitched one, and they said it wasn’t doable with their tech, so he dialed down expectations and tried again. All along its troubled development, he knew it was, at best, going to be a “B” game. From the start, it was a bargain title. Even then, it fell short of his vision. He had low aims for Bad Day L.A., and it failed to even meet those. 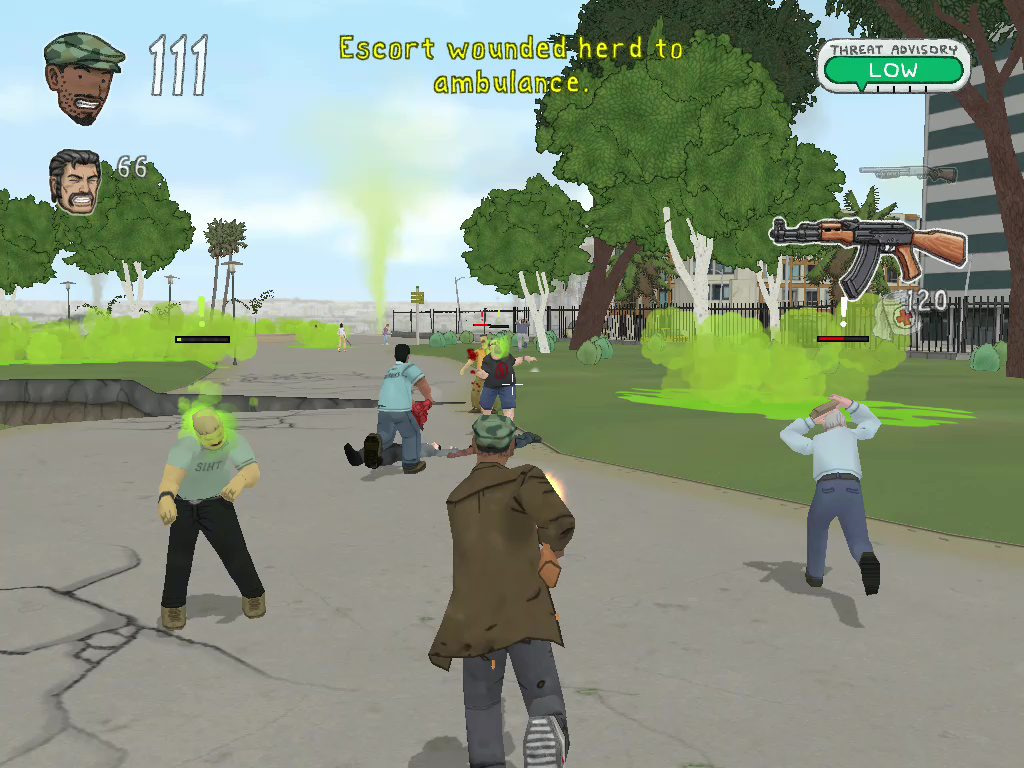 The main goal was to make fun of America’s so-called “fear culture.” Now, I think, when he references that, he’s talking about the media’s control over people’s perception of the world. After 9/11, the general U.S. public was frightened of terrorism. As that little Napoleon guy from Resident Evil 4 remarked, “Isn’t that a popular word these days?” But it’s not just that. Playgrounds became deathtraps through clever use of statistics, and be careful opening your mail: anthrax.

So, in Bad Day L.A., we have everything bad happening all at once. It starts with terrorists (of course) who crash planes full of toxic gas across the city. Then there’s earthquakes and a meteor shower: you know, a bad day.

Whether or not that parodies or lampoons “fear culture,” enh, I’m not seeing it. 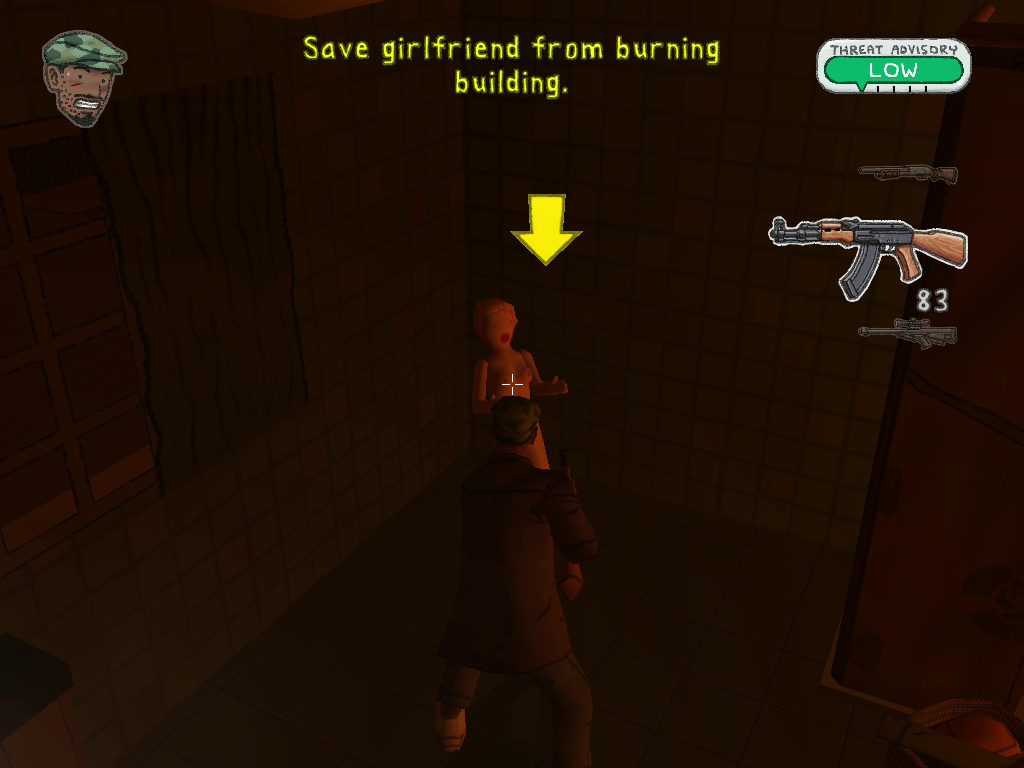 Most of the humor in Bad Day L.A. is about double entendre and satire, I guess. There are the obvious jokes about airport security and nail clippers and some of it comes across as pretty damned racist, but I think most of it either just went over my head or wasn’t funny whatsoever. I mean, when one of your opening statements is a homeless man pooping on the freeway, you’ve set the bar low. 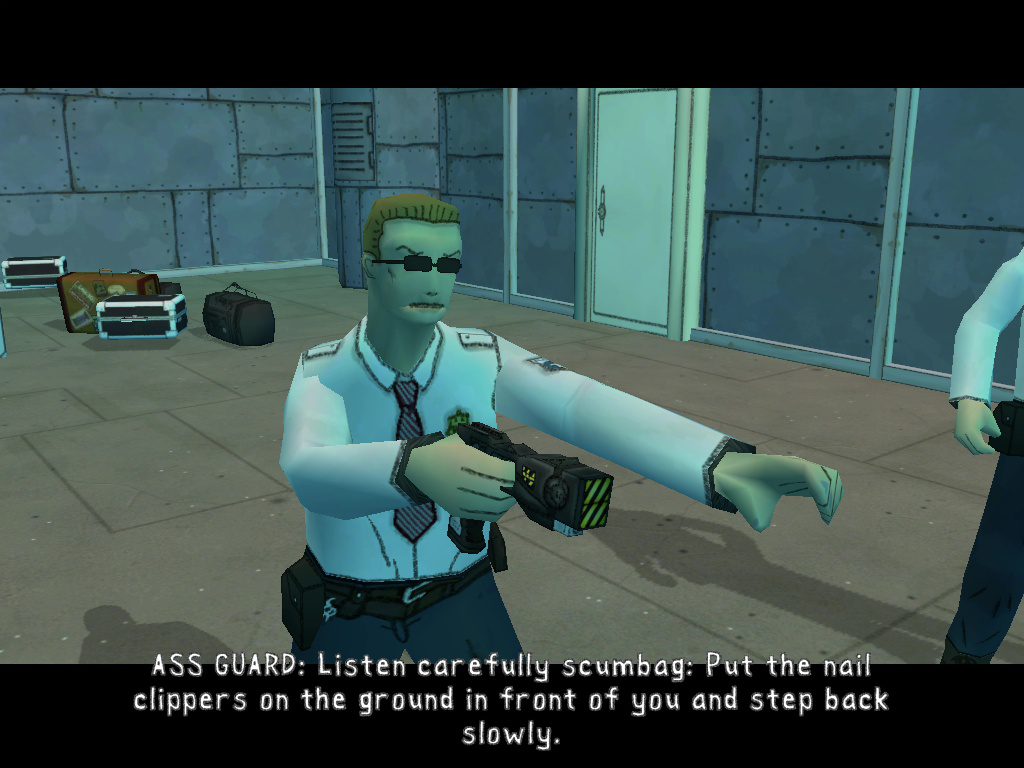 It’s weird because the art style certainly implies some level of creativity. Indeed, back in the day, I was lured by the siren call of giant burger men. Aesthetically, it holds up reasonably today. Ignoring its standard definition resolution, its sketched-out features are reasonably appealing. Not impressive, by any means, but considering the technical restrictions of the engine, we can give it a pass.

The gameplay, on the other hand, sucks about as much as you’d expect. You’re given a primary objective, but typically you also have to kill terrorists, zombies, or heal people along the way before you can actually accomplish it. Sometimes it tells you to put out inflamed people and there’s so few of them around that you just do circles until some spawn in. It’s boring fluff that gets repeated throughout.

Which is to say nothing about the stuff that just doesn’t work. There’s a parody of the Homeland Security Advisory System that’s supposed to judge civilian reactions to you. Kill a lot of people for no reason, and you’re a bigger threat. Heal people and there’s no problem. Except it doesn’t matter because people will arbitrarily love or hate you no matter what your threat level is.

The level design is so butt, that they implemented a clever way of finding your way around. If you don’t know where an objective is, you just ask someone and an arrow points you to where you need to go. That means the developers don’t need to communicate anything with the environments. Don’t know where to go? Just ask. 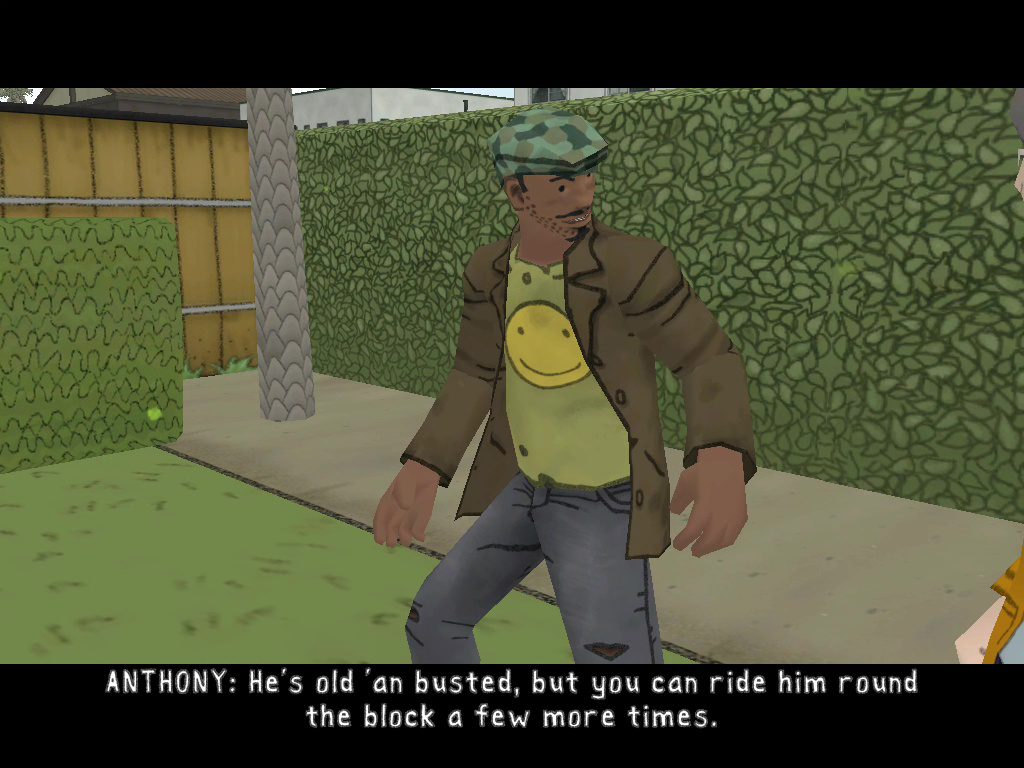 In some ways, I get American McGee’s frustration. He knew the limitations he was up against, and as things progressed, he knew there was little he could do but brace for impact. I just don’t know where the hell the redeeming qualities that he contributed are. The art style? The soundtrack? It’s not the jokes or the storyline, that’s for certain.

There’s nothing wrong with releasing a game that’s not intended to compete against heavy hitters. A “B” game, as he put it. There are worthwhile games out there that didn’t have the budget or technology to stack themselves against what the mainstream considers a “good game,” but usually they have some greater ambition that shines through. Maybe an unusual mechanic, worthwhile characters, or a relatable message. Bad Day L.A. has none of that.

It’s not the worst game I’ve played by a comfortable margin, but it’s still completely irredeemable and without merit. There were no moments where I felt like I was having fun. There were no ideas buried in its depths that I thought could have worked if they were polished. It feels like no one on the team cared, and by American McGee’s own recollection, that may be the actual truth. Michael Mendheim once told me that no one sets out to make a bad game, but if that’s true, I have to wonder why more wasn’t done to avoid this one.

Zoey is a gadabout gaming hobbyist. She’s been playing video games all her life and is a lover of both new and retro games. She enjoys digging in the dirt and picking out the games that are perfectly fine if you clean them up a bit.