Huawei is the world largest 5G base station equipment vendor –

According to TrendForce’s research, Chinese and European telecommunications equipment vendors still account for more than 70% of the global market share in 2021. The top three companies are China’s Huawei (30%) and Sweden’s Ericsson (23%), and Finland’s Nokia (20%).  Although Huawei is still battling with the U.S. ban, its market share still dominates the world. The main reason for this is due to its price advantage and the support of China’s huge domestic demand market. 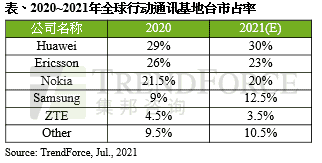 It is worth mentioning that Samsung has increased its market share to 12.5% ​​this year. However, this can only take the South Korean manufacturing giant to fourth position globally. It not only provides base station construction to the three major Korean operators, but also cooperates with US operators AT&T, Sprint, and Verizon. Furthermore, Samsung also has a deal (base station supply agreement) with Japanese operator NTT DoCoMo.

ZTE ranks fifth, with a market share of only 3.5%, which is far from Huawei. According to TrendForce research data, as of the end of 2020, China has more than 160 million 5G network users. This is approximately 89% of the total number of 5G users in the world.

As of July 2021, China’s three major operators, China Mobile, China Unicom, and China Telecom, have built 916,000 5G base stations in China, accounting for 70% of the world’s total. This is enough to show the considerable extent of the Chinese market and become a supportive base station for Huawei’s mobile communications.

According to Huawei, as of March 2021, it has over 140 5G commercial contracts worldwide. It has also carried out a series of cross-industry cooperation in the fields of smart grid, VR/AR, car networking, telemedicine, and intelligent manufacturing. In addition, a patent analysis firm, IPLytics statistics, shows that as of March 2019, Huawei’s patent application for “standard-essential patent (SEP)” in the 5G field accounts for 34% globally. Huawei ranks first in the world with 1554 5G “standard-essential patents”.

As of 2021, a report from Amplified&GreyB shows that Huawei still retains its top spot for 5G Essential Patents. The company accounts for 18.3% with 530 patent families. Nokia and Samsung rank second and third with 14.6% and 12.9%. respectively. The top 6 companies include Huawei, Samsung, LG, Nokia, Ericsson, Qualcomm. Collectively, these companies account for 64.9% of 18,887 declared patent families. Out of 10,763 declared patent families, 2,893 families have been identified as core SEPs. Of this number, the top 6 companies account for 72.5%. As the world continues to embrace 5G, Huawei may see its share deteriorate rapidly. However, the company is doing all it can to avert this situation.

Shinji Mikami Could Direct Another Game If It Was Completely His Vision, "Beginning to End"